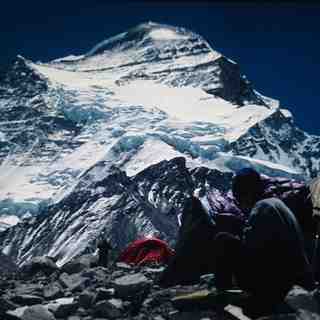 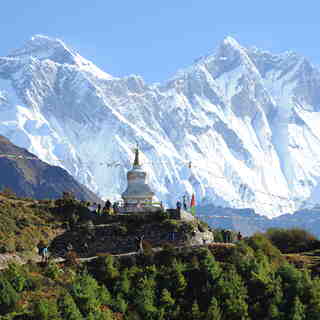 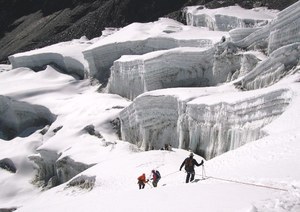 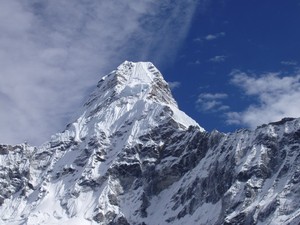 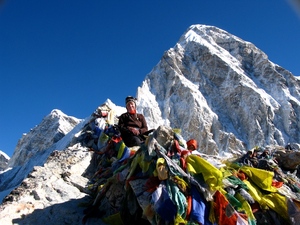 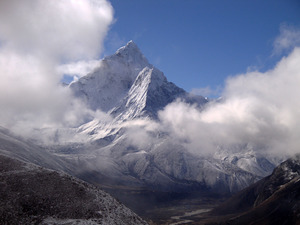 Mount Everest is the highest mountain in the world. Its elevation of 29.035 feet (8850 meters) was determined using GPS satellite equipment on May, 5, 1999. It was previously believed to be slightly lower (29,028 feet /8,848 meters), as determined in 1954 by averaging measurements from various sites around the mountain. The new elevation has been confirmed by the National Geographic Society. The first seven attempts on Mount Everest, starting with a reconnaissance in 1921, approached the mountain from Tibet, where a route to the summit via the North Col and North Ridge seemed possible. All were unsuccessful. George Mallory, who spearheaded the first three expeditions, lost his life with Andrew Irvine during a failed ascent in 1924. Unsuccessful attempts continued through 1938, then halted during World War II. By the war's end, Tibet had closed its borders, and Nepal, previously inaccessible, had done the opposite. Starting in 1951, expeditions from Nepal grew closer and closer to the summit, via the Khumbu Ice fall, the Western Cwm, over the Geneva Spur to the South Col, and up the Southeast Ridge. In 1953 Edmund Hillary and Tenzing Norgay reached the summit. Since the first successful ascent, many other individuals have sought to be the first at various other accomplishments on Mount Everest, including many alternative routes on both the north and south sides. Italy's Reinhold Messner has climbed Mount Everest twice without oxygen, once in four days. He is also the first to solo climb Mount Everest, which he did in 1980. Ten years earlier, Yuichiro Miura of Japan had been the first person to descend the mountain on skis. In 1975, Junko Tabei, also of Japan, was the first woman to climb Mount Everest. The first disabled person to attempt Mount Everest was American Tom Whittaker, who climbed with a prosthetic leg to 24,000 feet in 1989, 28,000 feet in 1995, and finally reached the summit in 1998. The record for most ascents belongs to Sherpa Ang Rita, who has reached the summit ten times. More than 600 climbers from 20 countries have climbed to the summit by various routes, from both north and south. Climbers' ages have ranged from nineteen years to sixty. At least 100 people have perished, most commonly by avalanches, falls in crevasses, cold, or the effects of thin air. Climbing on Mount Everest is very strictly regulated by both the Nepalese and Chinese governments. Permits cost thousands of U.S. dollars ($50,000 for a seven member party in 1996), and are difficult to obtain, and waiting lists extend for years. Treks to Mount Everest base camp, minus the summit attempt, are becoming increasingly popular on both the north and south sides of the mountain. On the north side, a Buddhist monastery stands at the foot of the Rongbuk Glacier, beneath Mount Everest's spectacular north face. The monastery is one of two whose locations were selected specifically to allow religious contemplation of the great peak. The other is the Thyangboche Monastery in Nepal. The once-active Rongbuk monastery in Tibet has required much rejuvenation from the destruction it experienced following China's invasion of Tibet. Mount Everest is also known by the Tibetan name Chomolangma (Goddess Mother of the Snows), and by the Nepali name Sagarmatha (Mother of the Universe).

This is a great 'resort' that has more of a back country vibe to it compared to a typical commercialized ski resort. The terrain is very diverse and boasts the most vertical of any ski area catering to more advanced skiers and boarders. Ski conditions are typically 'blower', literally, as winds commonly surpass 90km/hr. And there are a few scattered terrain/crevasse parks that even the most seasoned adrenaline junkies will find challenging. Lift access is via Sherpa and can take anywhere from several weeks to 3 months, so bring snacks as on-mountain catering is limited. During high season, the mountain can appear to be fairly crowded. However, most of the other people are actually dead mountaineers of decades past long forgotten but perfectly preserved by the frigid temperatures of the unforgiving local climate. Apres' is pretty average with one main bar called base camp which serves the typical fare of porridge and boiled water.

[note from the editor: an interesting 'review'.] 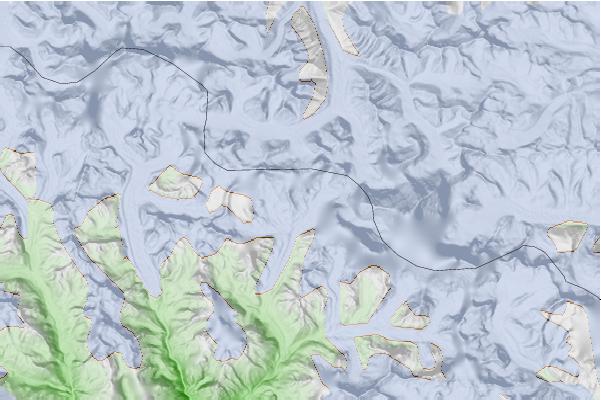